ID
A relentless stream of digital images is produced by social media. Images that stream into our consciousness for fractions of seconds and are blotted out by the next image in constant supersession. In their mass character these images become the unsubstantial framework of a gigantic total performance. Negotiated topics and styles consume themselves at unprecedented speed. In a permanent hiccup, algorithms are operated and everything digitalized that can be brought into the Social Media world of experience. From trivial to high culture, all float in the bubble of this image storm. Lacking ground beneath our feet we shift our identity into these virtual spaces. Internet Dots become our matrix. They give birth to our second I. Nude calibrated to 72 dots per inch the Being of this logic shimmers in all its forms and puffs and puffs itself up into the substanceless fascinosum.
The authorship of these visual products is marginalized solely through use as a titbit for attention. This also applies to the image producers, who constantly straining for threshold of originality and authorship, have their performance calculated on this stage. Be original, be original, be original. Until exhausted the image and the author no longer perceive, in this echo chamber, the negotiated and fading I. Hanging on the drop of attention, worn down by the originality imperative, in this pauseless theatre with no final act, the exhibited and used loses its signature and degenerates into obsessive flaunting in itself. In the age of this type of birthing of images, for the purpose of feeding into social media, the question arises, what have images after assimilation by “social media” become? Are the authors behind the images even still relevant? Or do they degenerate into mere birthing  machines, delivering with their images exclusively the digital fuel of a self-maintaining machine?
Odo Hans delves into analysis here. Anonymous excerpts of low-definition Instagram images become point of view in his work “ID”. The original motifs, mainly themselves representative surfaces of art, queried as to their identity content in context as “social media product”. Turned out in 72 DPI and then upscaled as excerpt to large-format 300 DPI, his “fragments” receive characteristics entirely of their own. Colour density, sharpness and tonality differ from the starting material. Inessential things come into focus and become the central image content. Despite appropriation, in this double strategy of negation (trivial extract/low basic resolution) an independence vis-a-vis the starting motifs remains intact. These latter degenerate into an “open source-like” basic substance and function now merely as pickable data. Odo Hans’s blow-ups condense this data into a blurred whole, the original identity is dissolved.
Here the work becomes aligned with the initially formulated tendencies of dissolution and obliteration of identity and authorship of images in the “social media” maelstrom.Accordingly, Odo Hans’s work ID functions as “fine-grained” image and media critique and simultaneously poses the question: Is that allowed?

Reclaim
Reclaim organizes public space. In the form of an award, 40 artists are exhibited on billboards in Cologne for 10 days annually. Entirely in line with the motto: Art in, advertising out! The 2020 award was announced to the public via an art campaign. The 6 Reclaim colours occupied part of the public advertising space 14 days before the actual exhibition began. Without further provision of information, presented in random hanging, the colour surfaces invited reflection upon the function and use of billboards. Street artists made use of the occasion and tagged, painted and stickered surfaces.  www.reclaim-award.org   Music / Adam Kroll

Ink
Abstract pencil & ink drawings in A3 format. In these drawings, the pencil’s tip serves as a brush tip. Moved frequently across the paper in rolling and pushing motions, the ink leaves behind its traces rhythmically, uncontrolledly, in gestures both minimal and sprawling.

Ink
Ink by means of a piece of metal, moved and dispersed on 60 x 80 cm papers until a sudden ‘halt’ speaks meaning to the arising shapes. 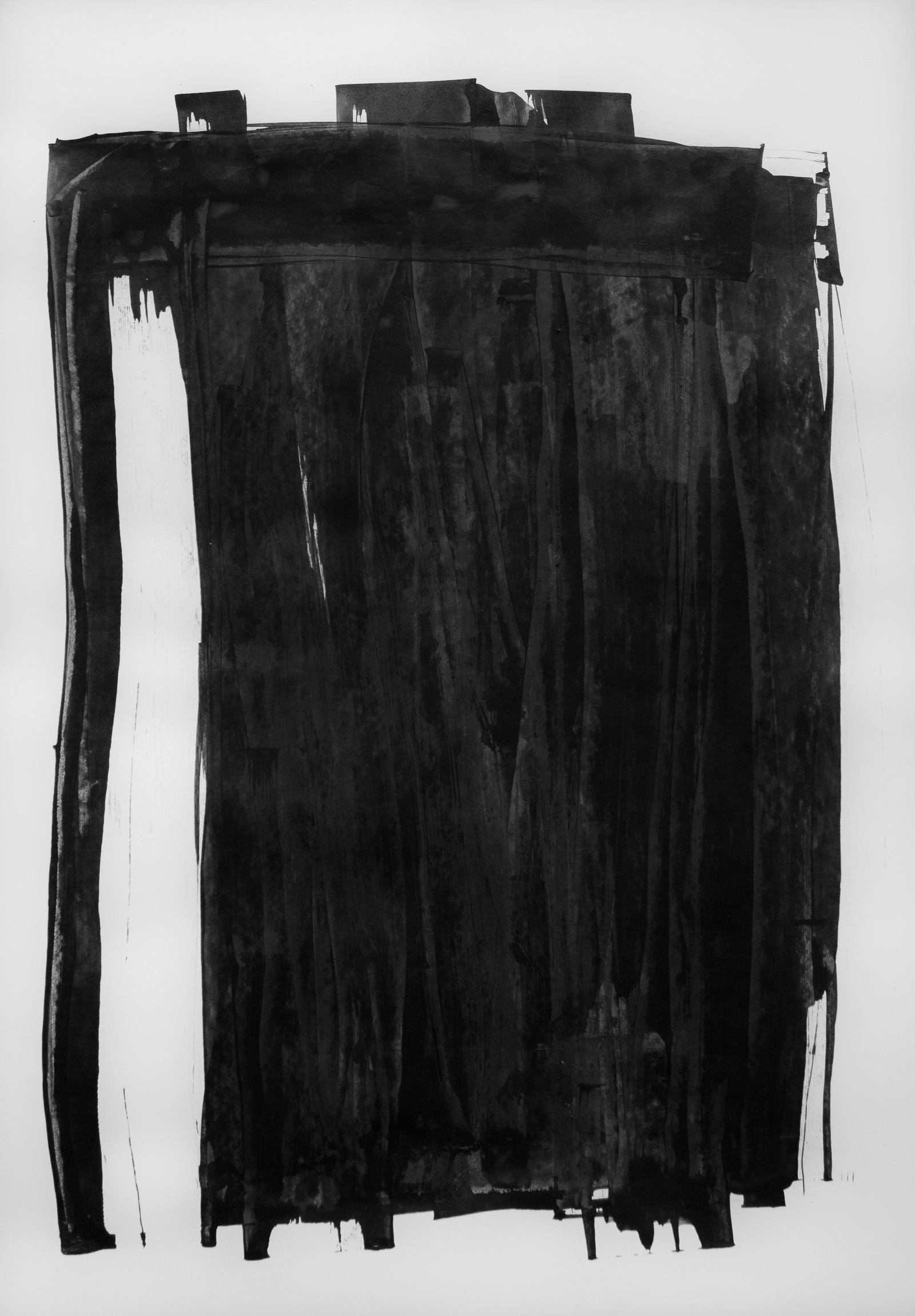 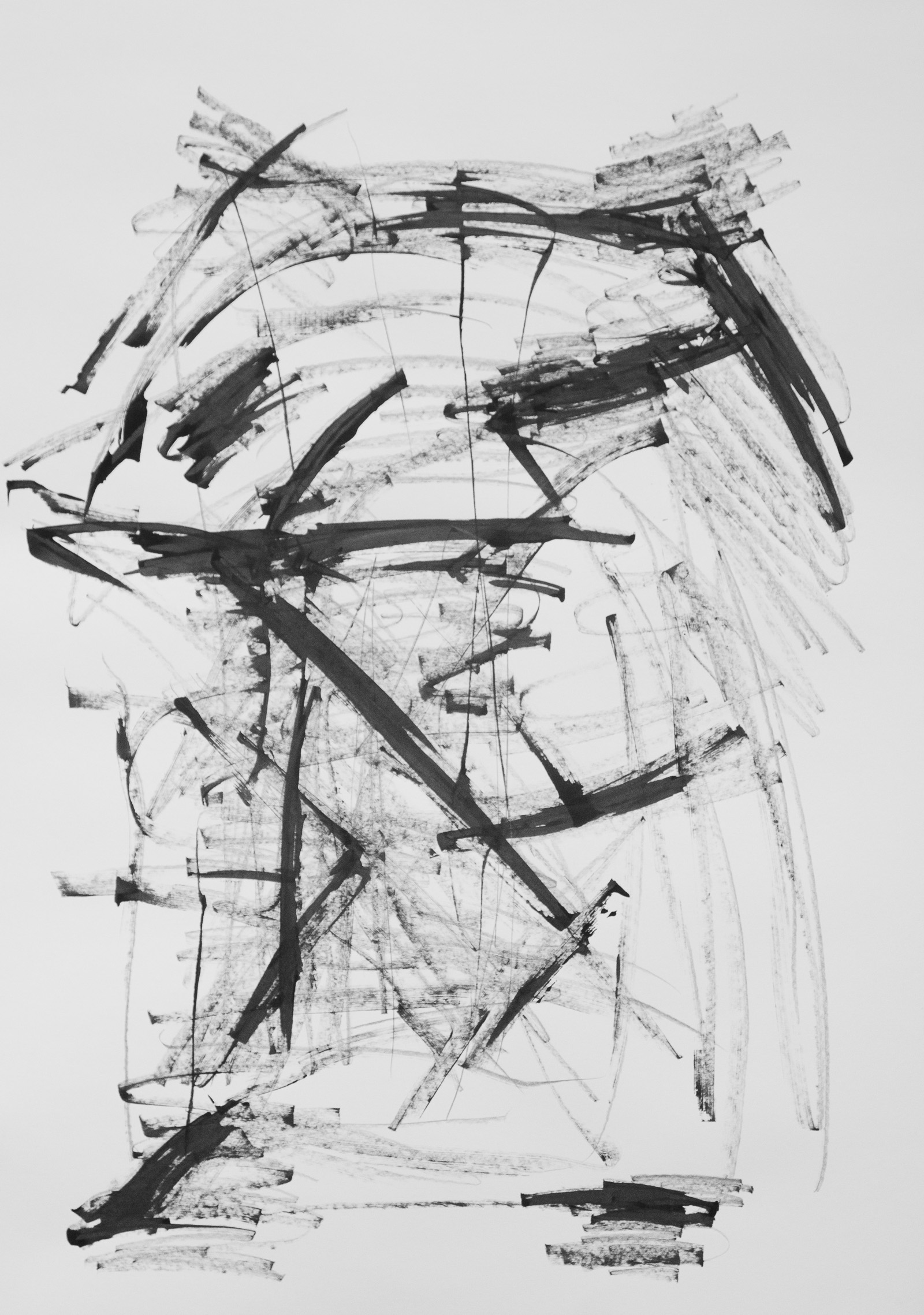 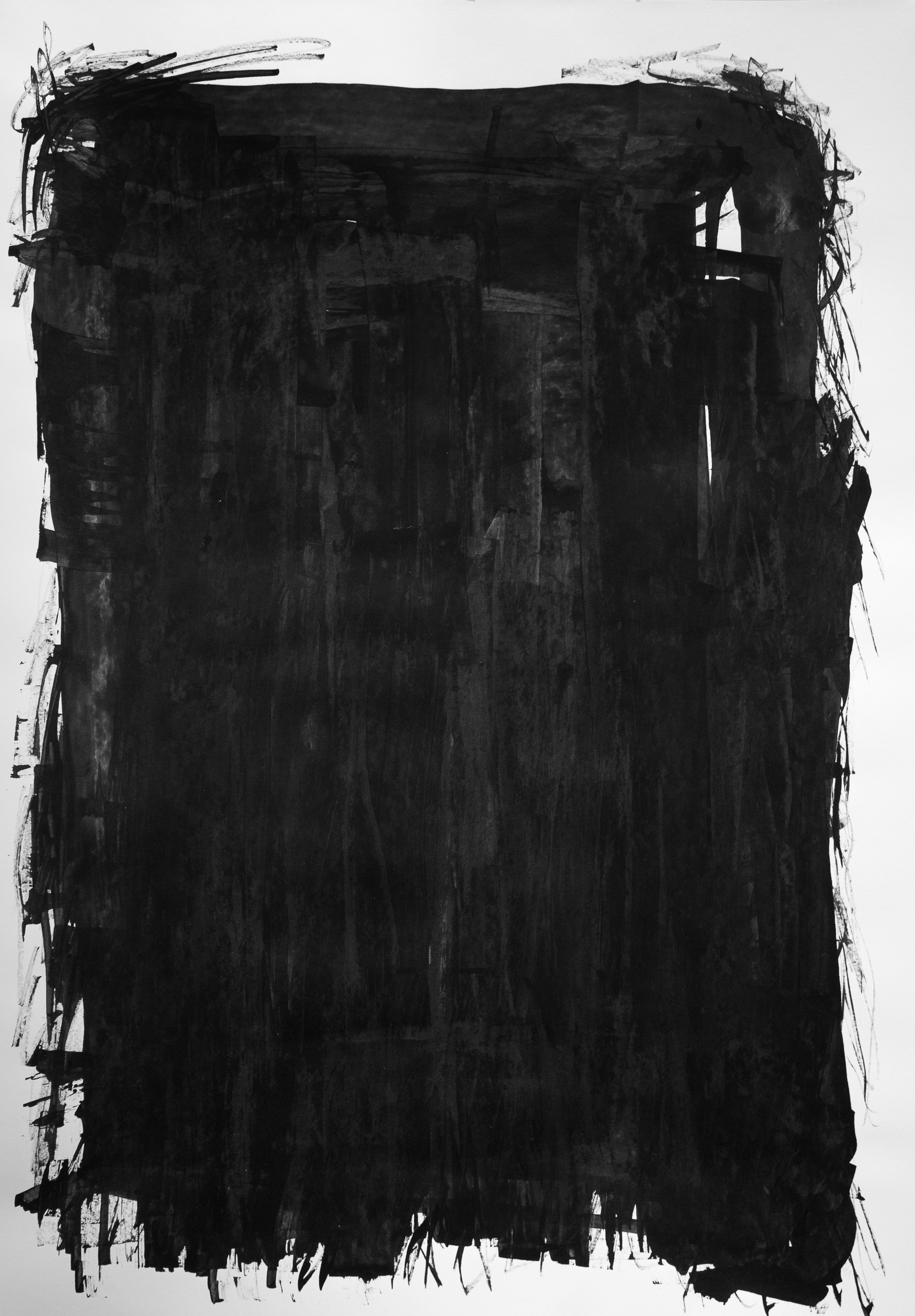 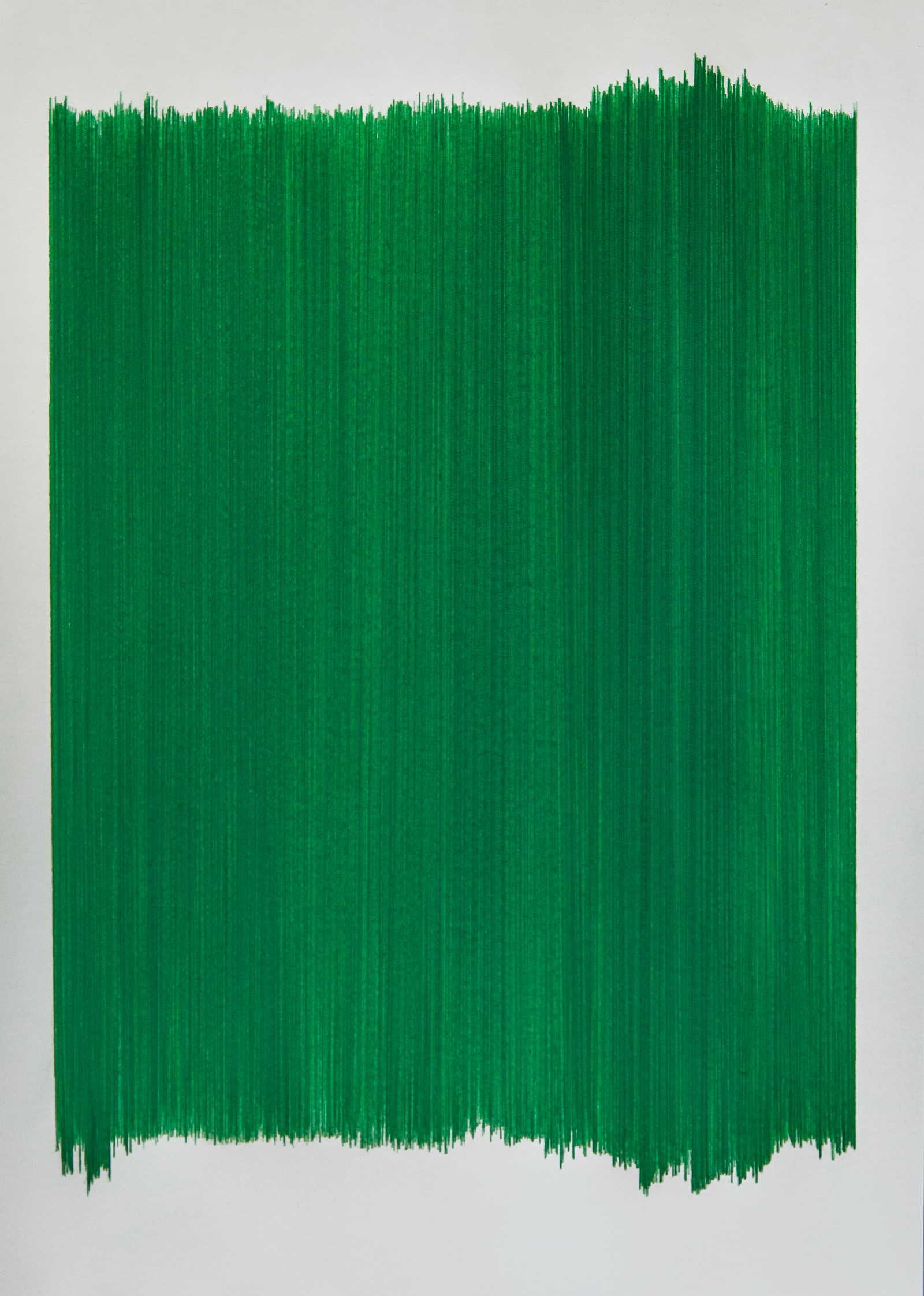 Strokes
Repetitive pencil and coloured pencil drawings on 70 x 100 cm paper or 70 x 100 cm passepartout cardboard. The number of required pencils of the same type varies, per design, between one and ½ and 10 pencils (depending on hardness). The lines are drawn using a ruler. Since the lines are not drawn continuously over the length and the starting pressure of the pencil is not constant, fine and harsh gradations arise within the spectrum of colour, of respectively, of grey. Shot through by these variations, the surfaces as a whole become minimalistic compositions of this form of colour and grey application. 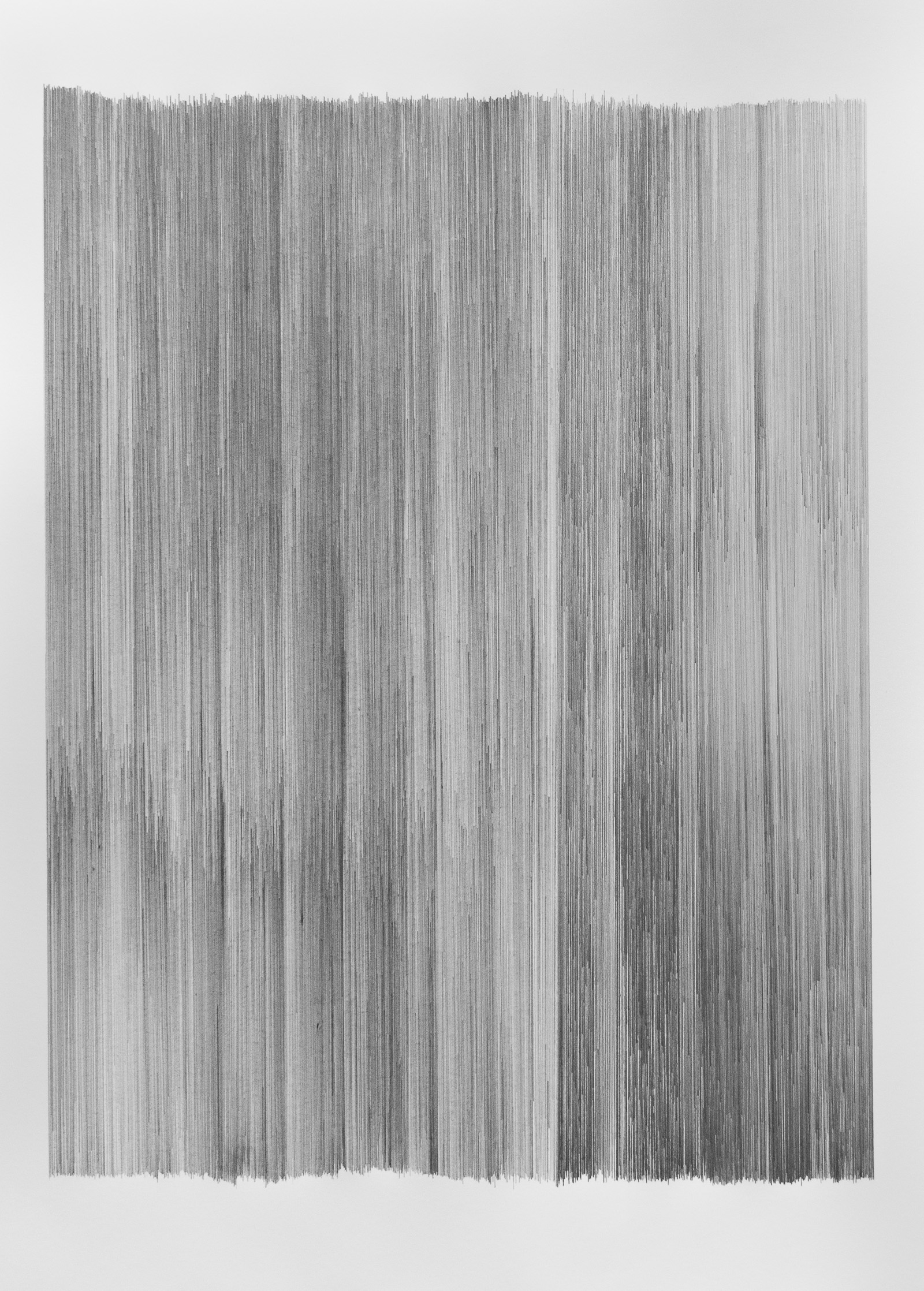 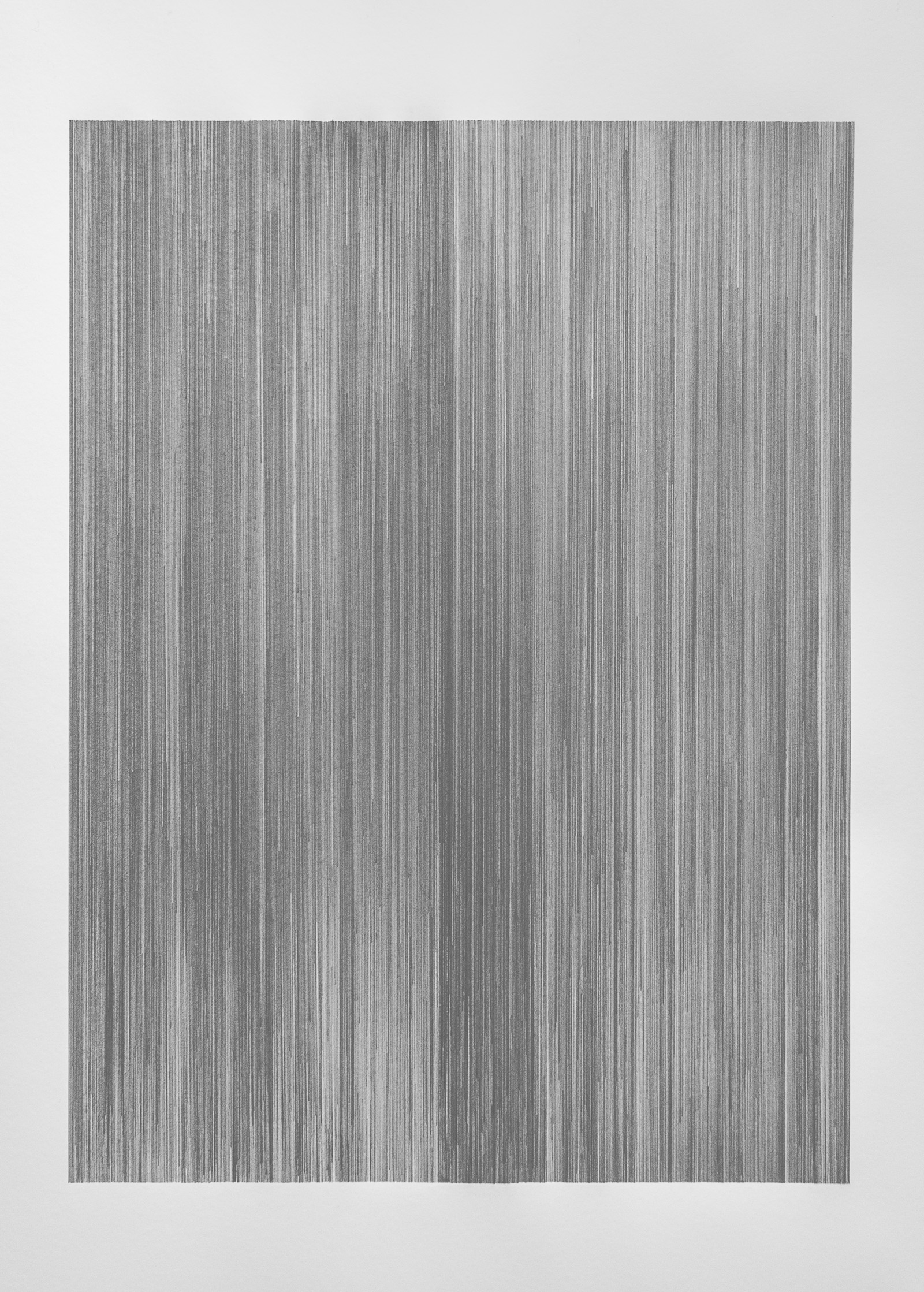 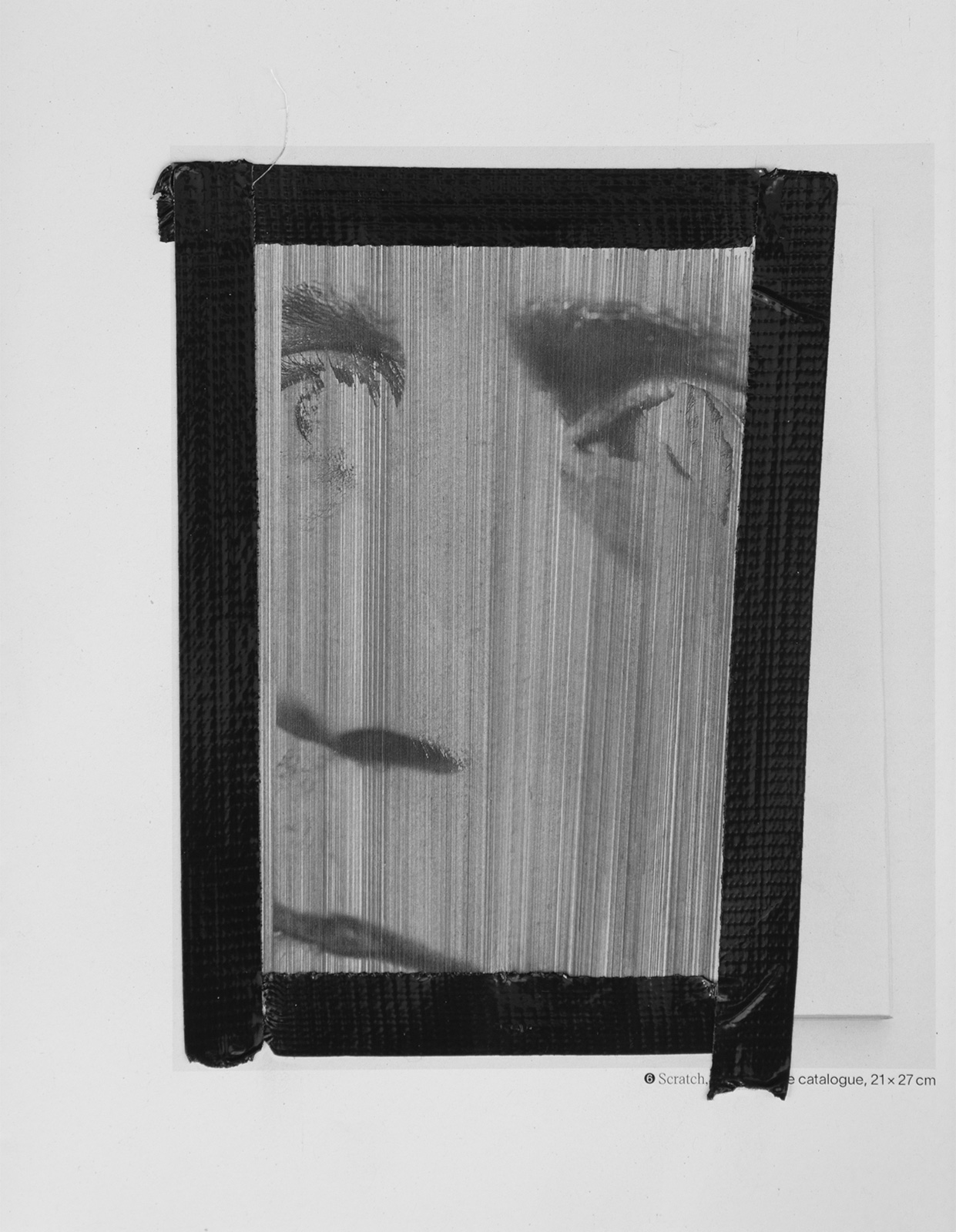 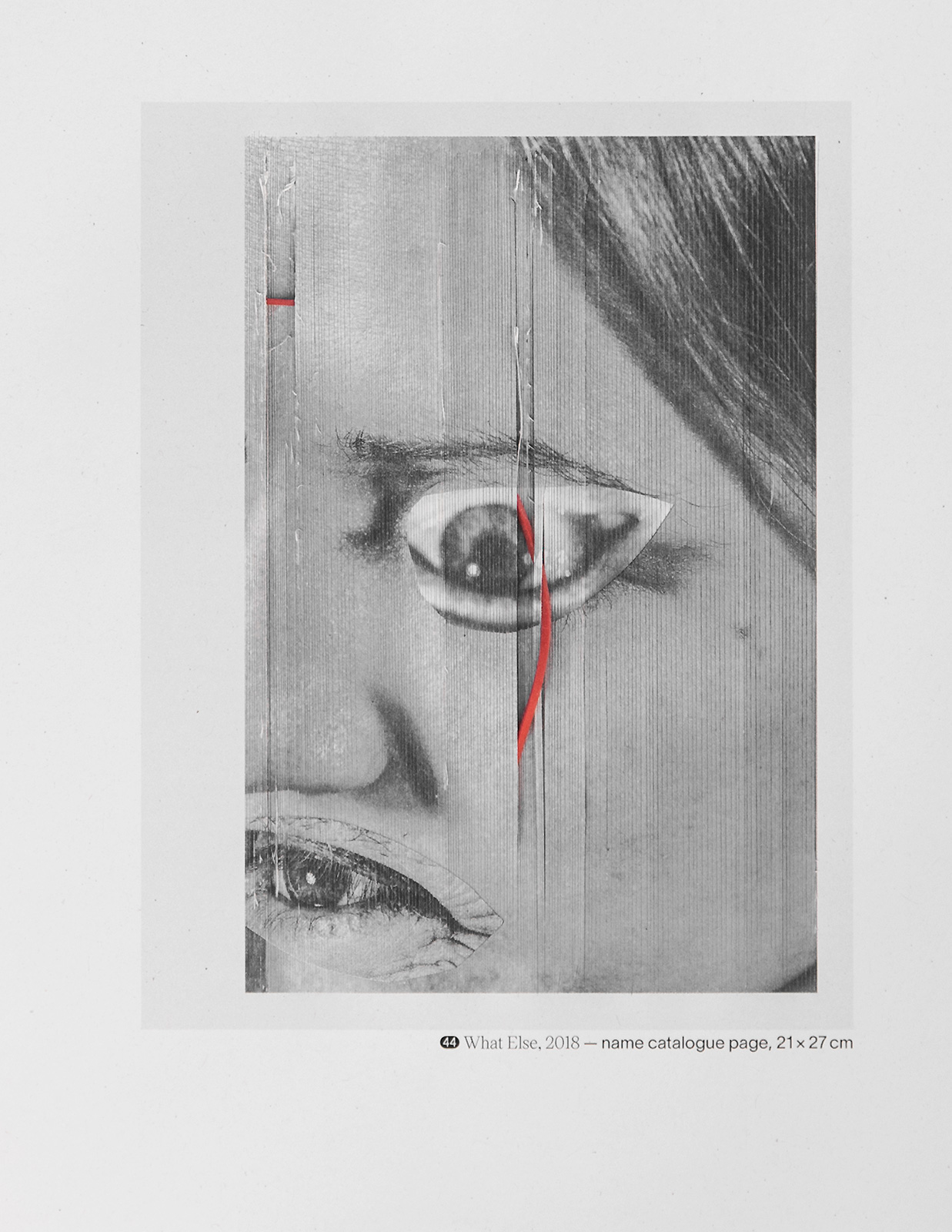 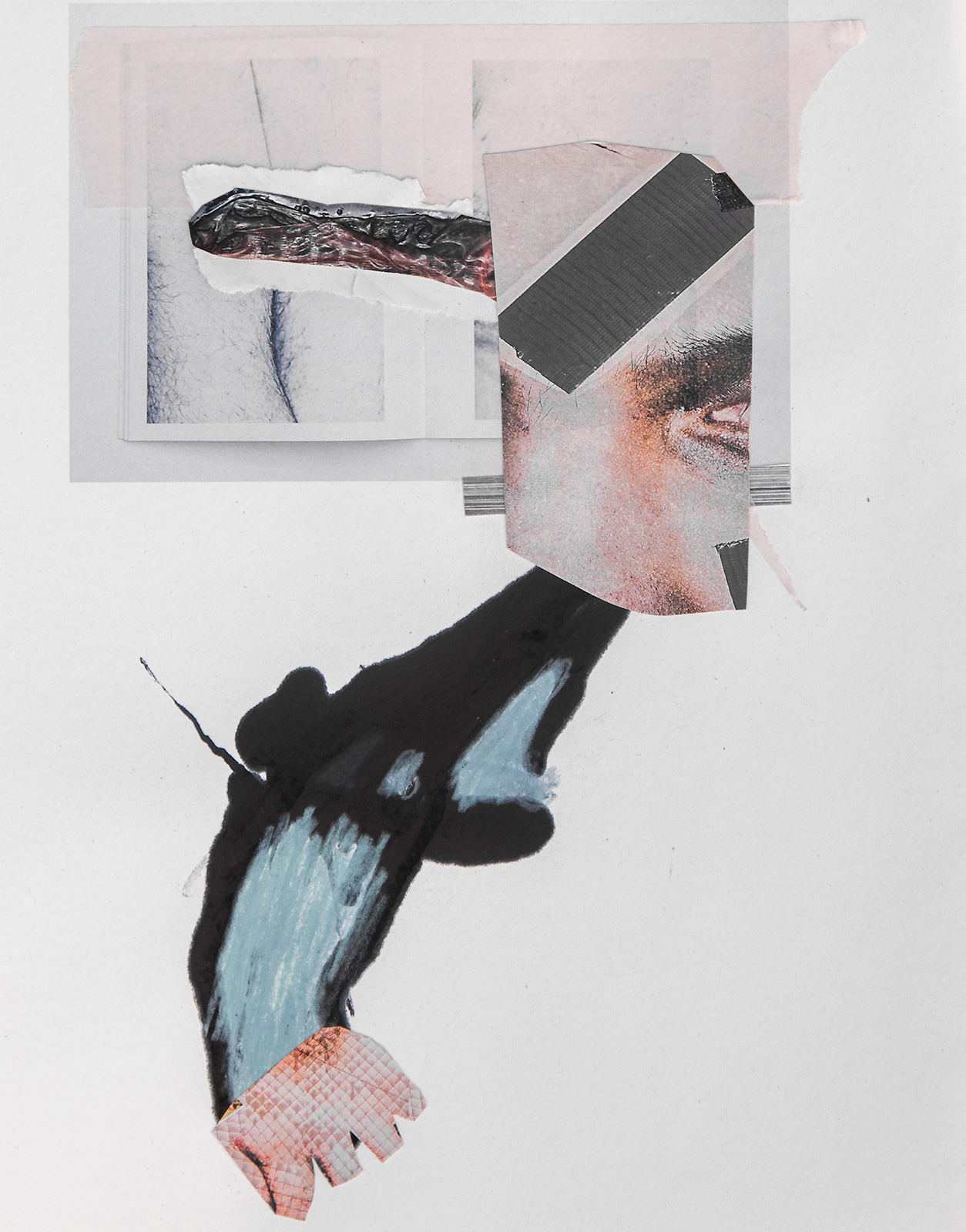 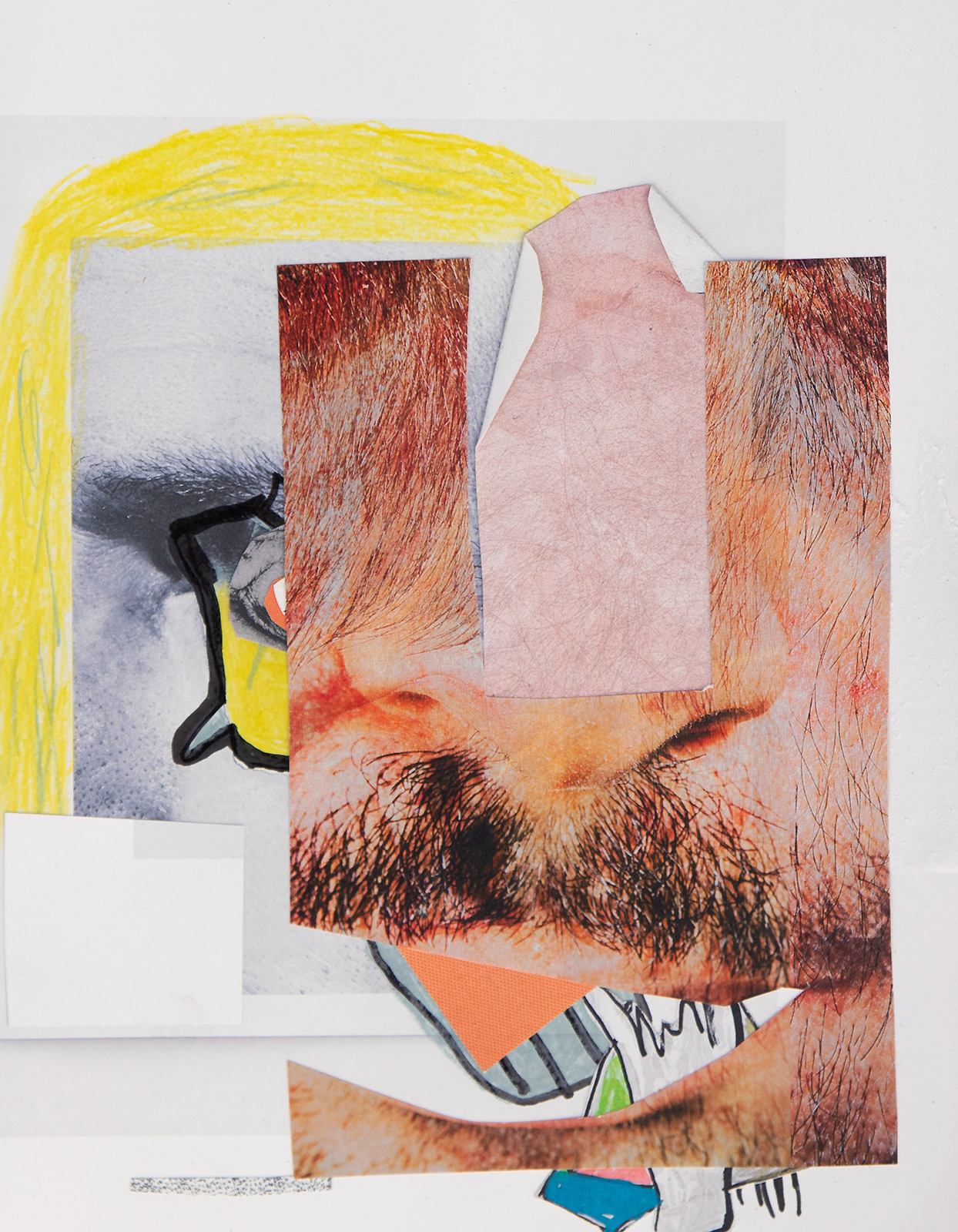 Body becomes Body:New collages
The catalogue Body becomes Body becomes the object of further artistic interventions. The approached designs, themselves already collages, digital hybrids, sketches and many more things, are cheerfully recombined and expanded by new strategies from other projects, by symbols, incisions, oiling, gluing and spontaneous colour gestures. The complexity of the body as a whole continues to increase. 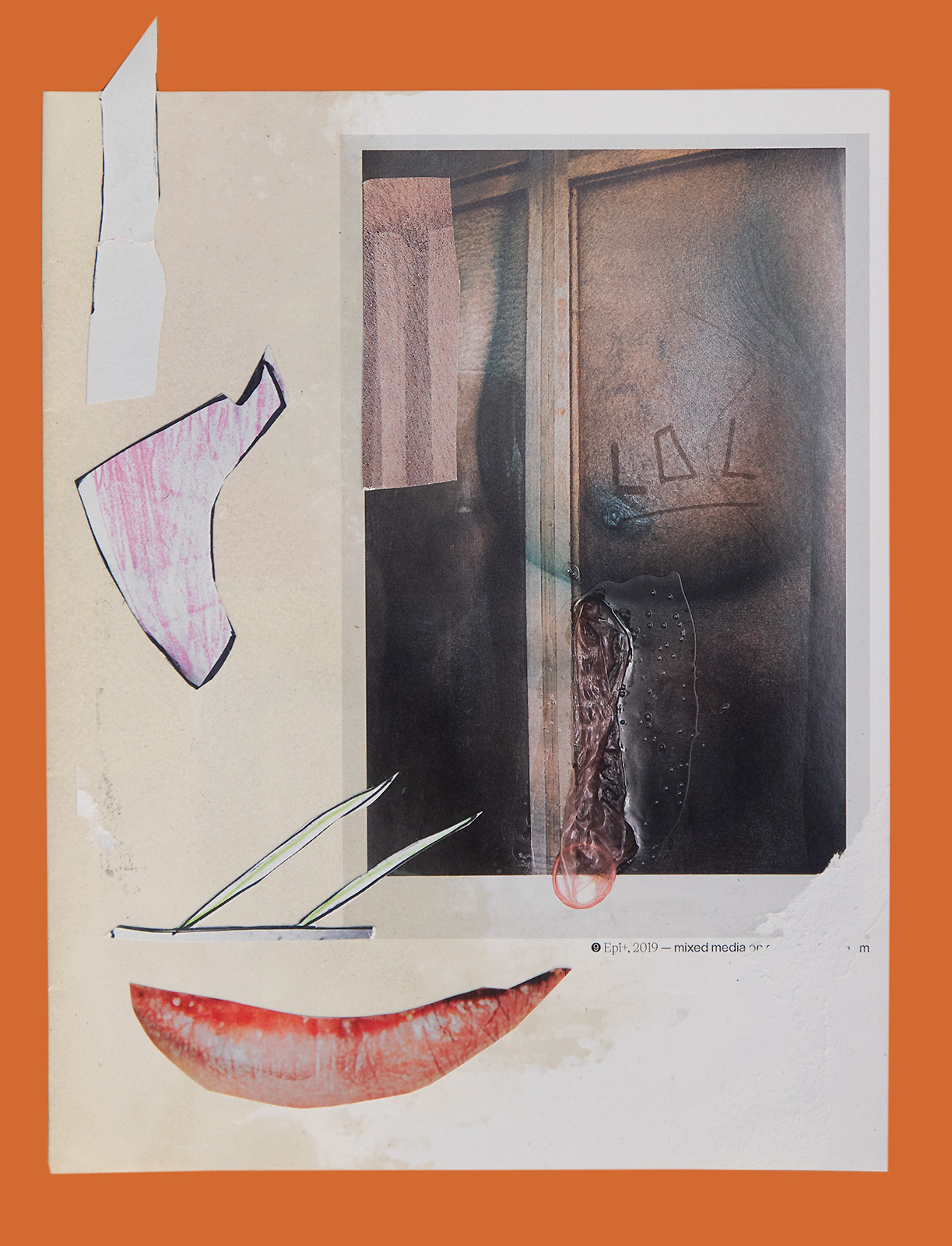 What to do if you love painting and drawing but have no talent.
Close your eyes and take your left hand for drawing (if you happen to be right-handed) and try to visualize the main aspect of what you are trying to draw or paint. It is important to have a picture in your mind that does full justice to this unaccustomed strategy. My two pictures that occurred to me were, on the one hand, a picture of a lynx sitting on a cactus, surrounded by ten hunting dogs and several hunters on horseback and holding guns. It is a book from my early childhood that shows lots of animals. The drawings illuminating these animals’ behaviour had such a formative impact on me, because they demonstrated how their behaviour influenced, or was influenced by, human behaviour. So most of the time, the animals were depicted as dangerous or harmful to humans, or, for example, the crow was represented as a thief of reflective materials, such as watches. And if you cast your mind back to how important watches are for children, crows really do become associated with stealing time. Or, in the case of the lynx, it became an allegorical symbol of sitting proud as a king at the top, equipped with special skills but lonely and surrounded by mediocrity that tries to assimilate its genius in trophy form.
The second picture that really affected my mind was just a picture within a story I read with my seven-year-old son. It is called ‘Kaspar, Opa und der Schneemensch’ and is written by Mikael Engström. In this story, Kaspar is so fascinated on really cold winter days by a metal railing outdoors that an inner voice keeps telling him to put his tongue on it. And that is exactly what he does, with the consequence of getting his tongue in a firm frozen grip every time, which his grandfather has to painfully loosen. But he keeps on doing it.
This literary picture so intensively evoked the aspect of following your own path even if it is totally irrational that it is still vividly present in my mind.
So these two pictures constituted the inner desire to work with them. In keeping with the psychological meaning of the two pictures, I decided to draw with my left hand, and closed my eyes in order to follow my inner voice and totally ignore the aspect of doing it the right way.
The results look like first steps into the world of sketches. By doing it my way, I accomplish drawings that resemble the work of small children, to whom the original pictures are addressed.
Later on, I began to vary the design. The first designs were coloured in using the right hand and with open eyes. Subsequently, I decided to do it blind and using my left hand as well. 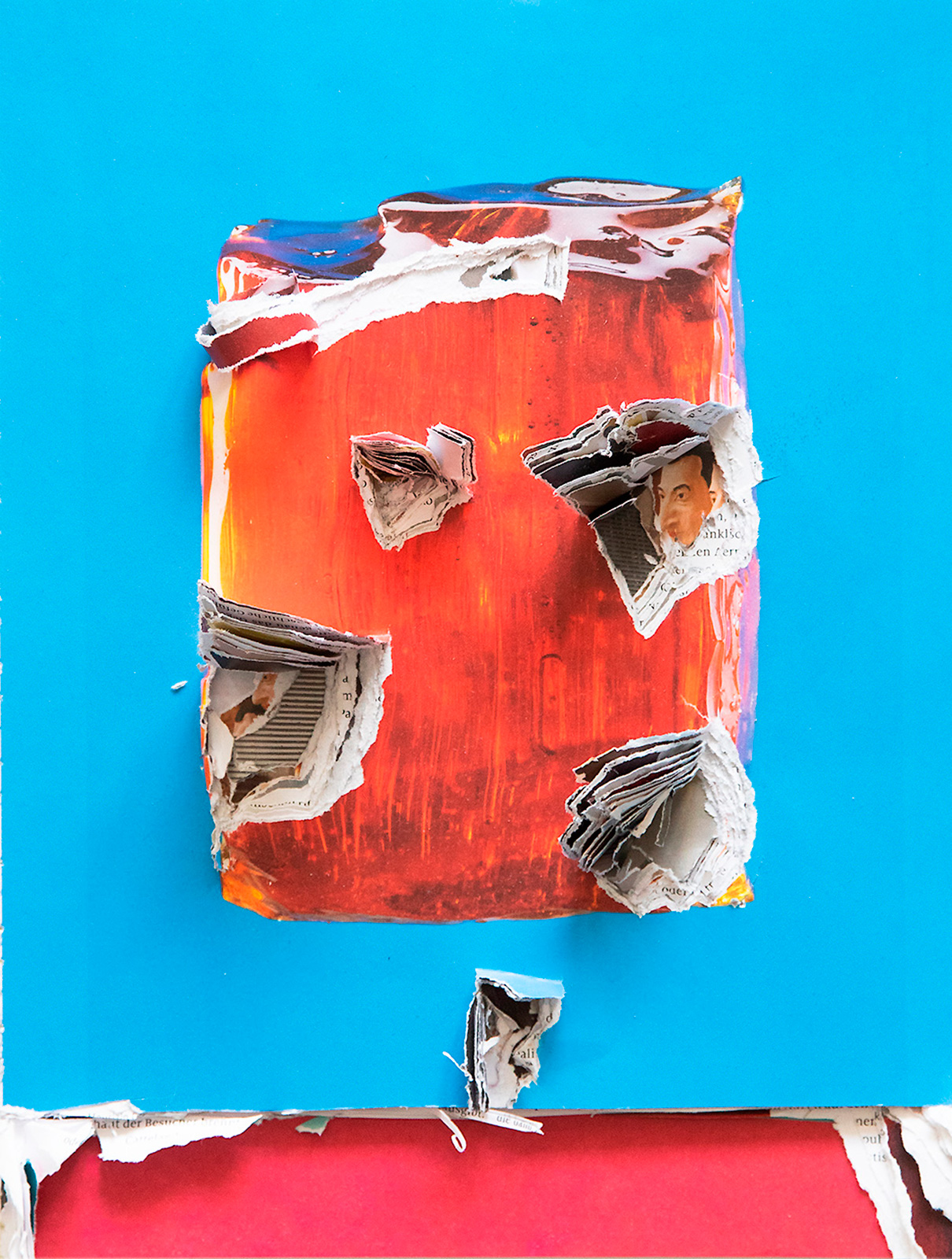 DU
Du magazine is transformed from a reporter on art into an object of art. It is turned into material, sketch pad, cultural disposable mass, forcibly hewn into shape by scalpel and knife. The picture and text scraps that arise in the process pierce through the treated designs from advertising and art. The messages of the latter are no longer interpretable. Content without function is made obvious, the essence of art visible. Now in all dimensions.

Filter
Commonly available white cigarette filters glued on paper are transformed into a two-dimensional object of data-handling. Once scanned and converted into this shape, the now available data itself becomes an object of filter processes. In the context of the data-handling, these algorithm-driven processes reveal, in their border areas, forms of inherent logic. Within these, the original data is transformed into mysterious symbolistic shapes, which appear to contradict the determinism of this solution.
The complex essence of these invisible algorithms and digital filters consequently becomes visible, on the object of the analogue filter, as the most improbable and yet most self-efficacious solution, in the form of colour leaps, colour seams and other artefacts as an ensemble of fantastical phenomena. 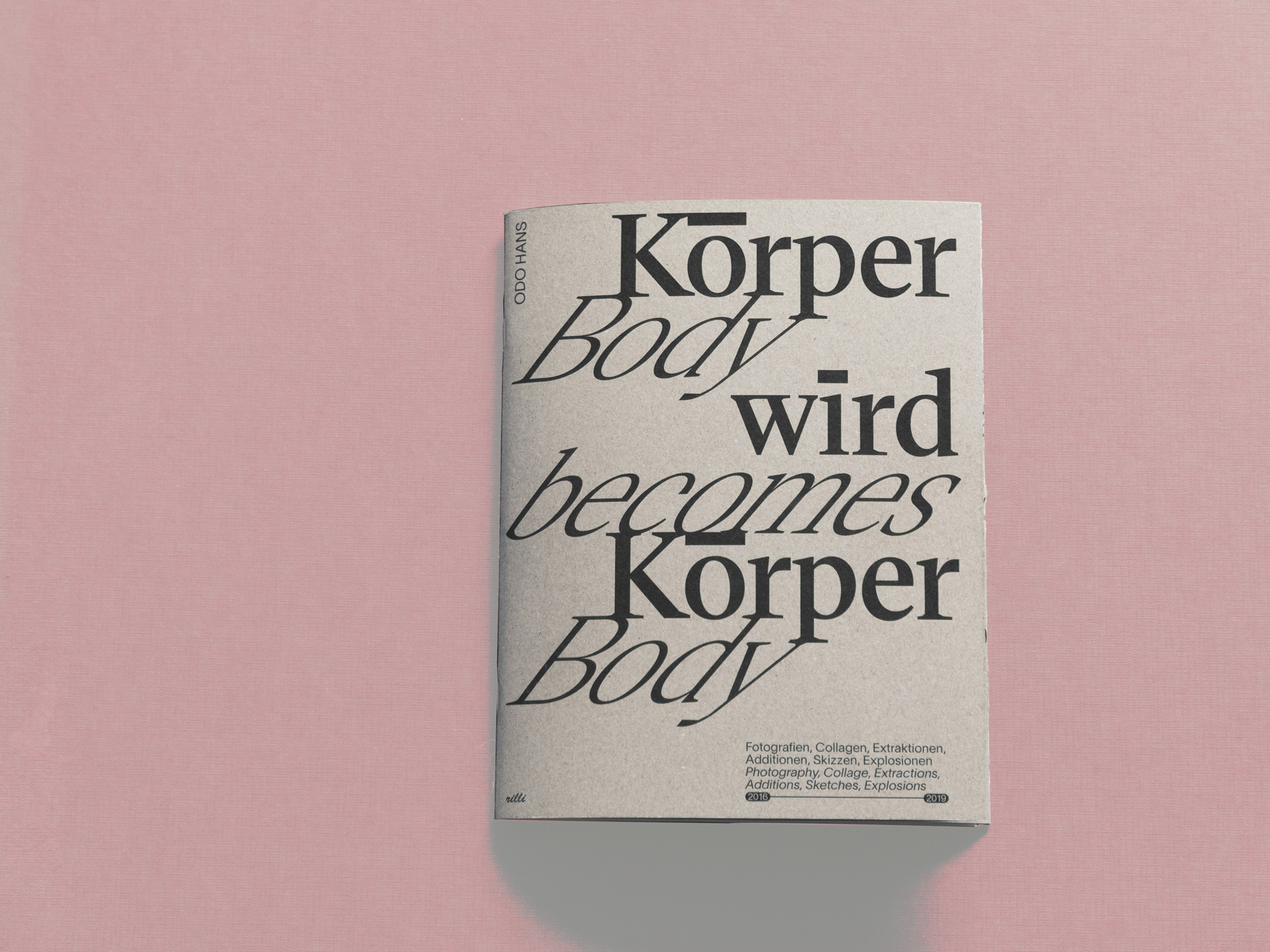 Body becomes Body
Photographs, collages, extractions, additions, sketches, explosions. In Odo Hans’s catalogue “Body becomes Body”, works from the years 2016-2019 are shown. Subject: The human body. Constructions of the Self. Starting from an original work that serves as a blank, Odo Hans develops an ever-more complex oeuvre of artificial body images, consisting of catalogues, prints and video works. These representative media are both end and starting products of his thing-associating and body-generating interventions. Doodling, dissecting, scorching, gluing, piercing gets done. Body works are buried and celebrate their resurrection. The catalogue “Body becomes Body” is a reference of these processes, and a further object of artistic explorations to come. 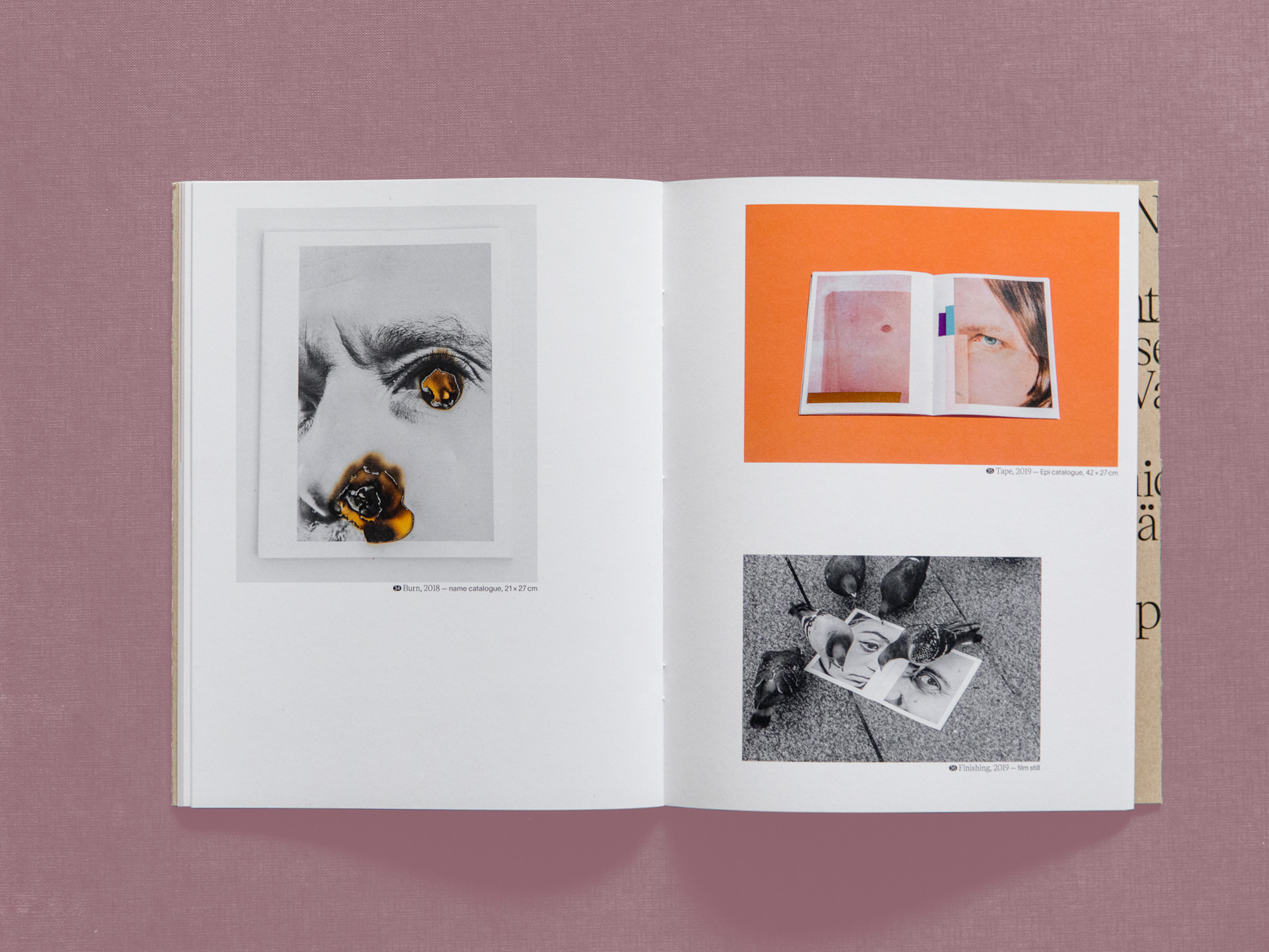 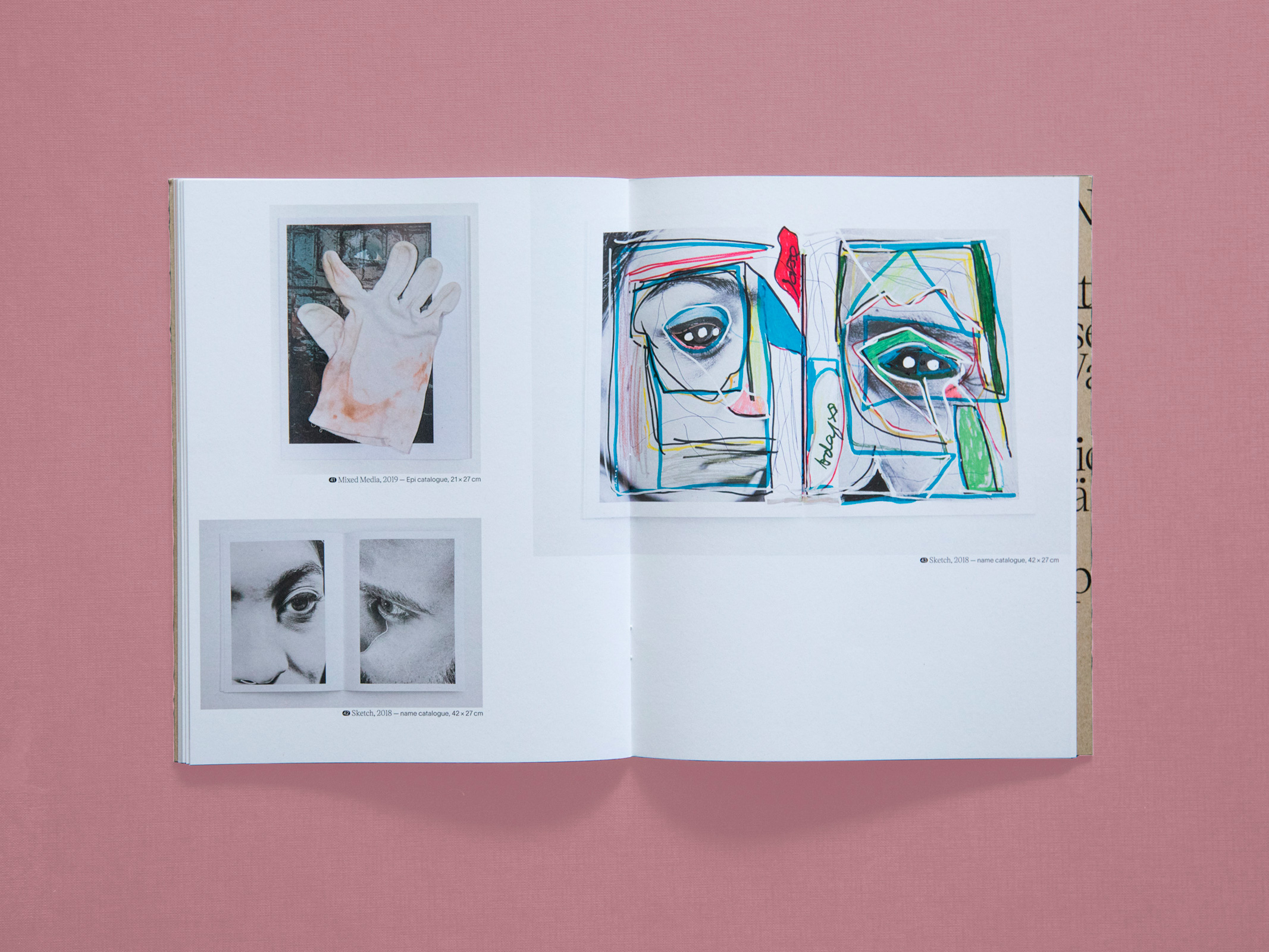 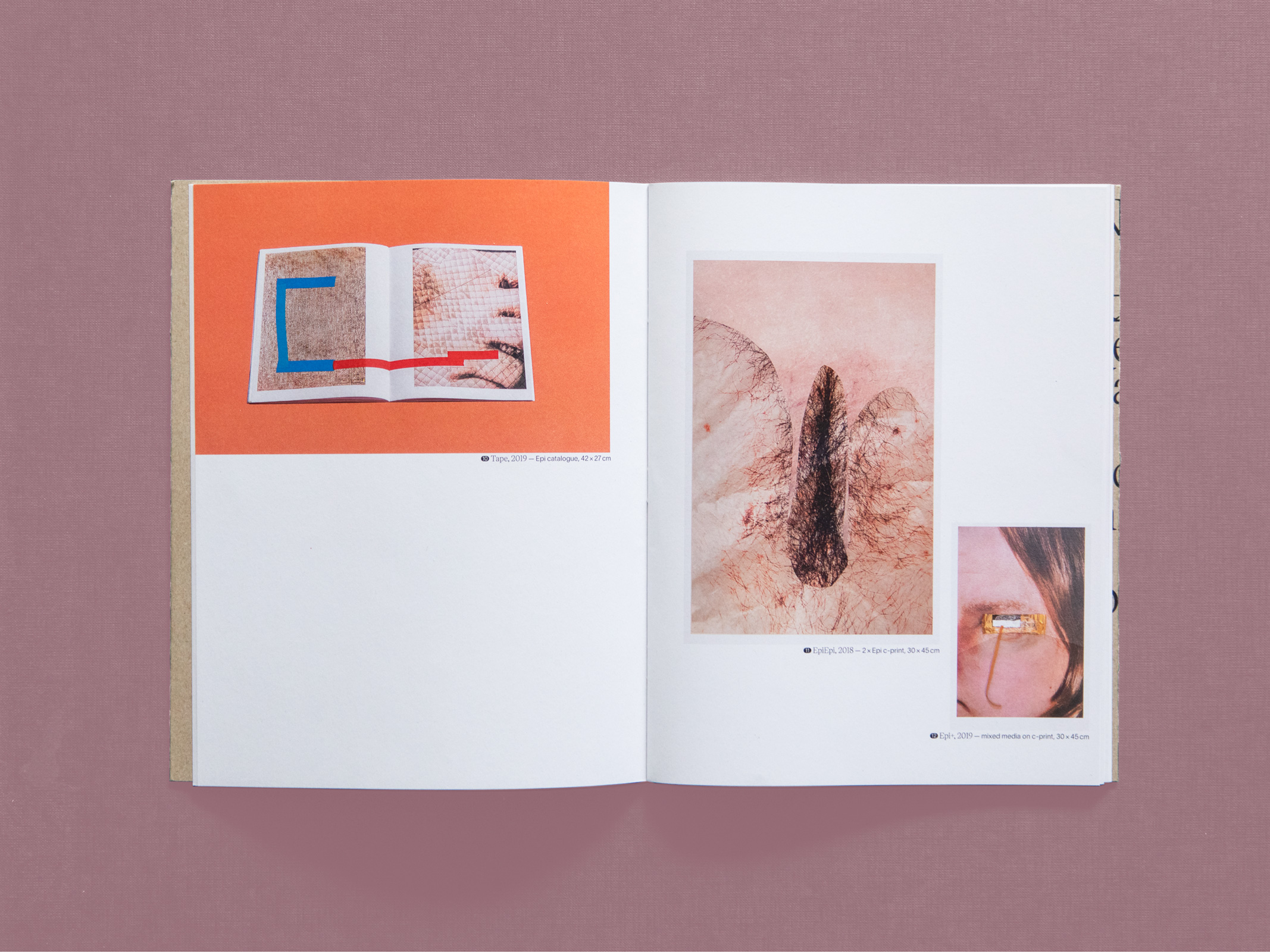 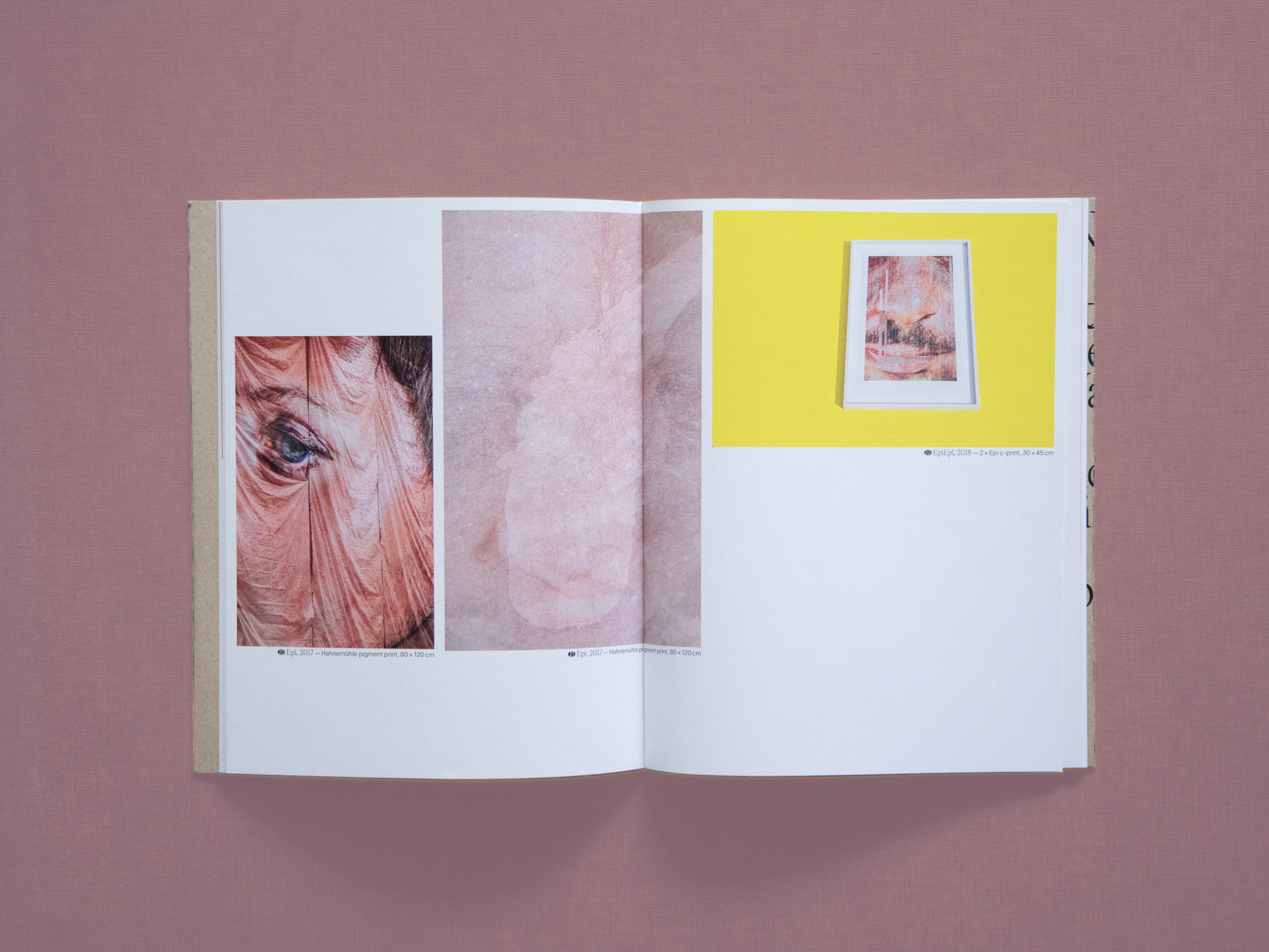 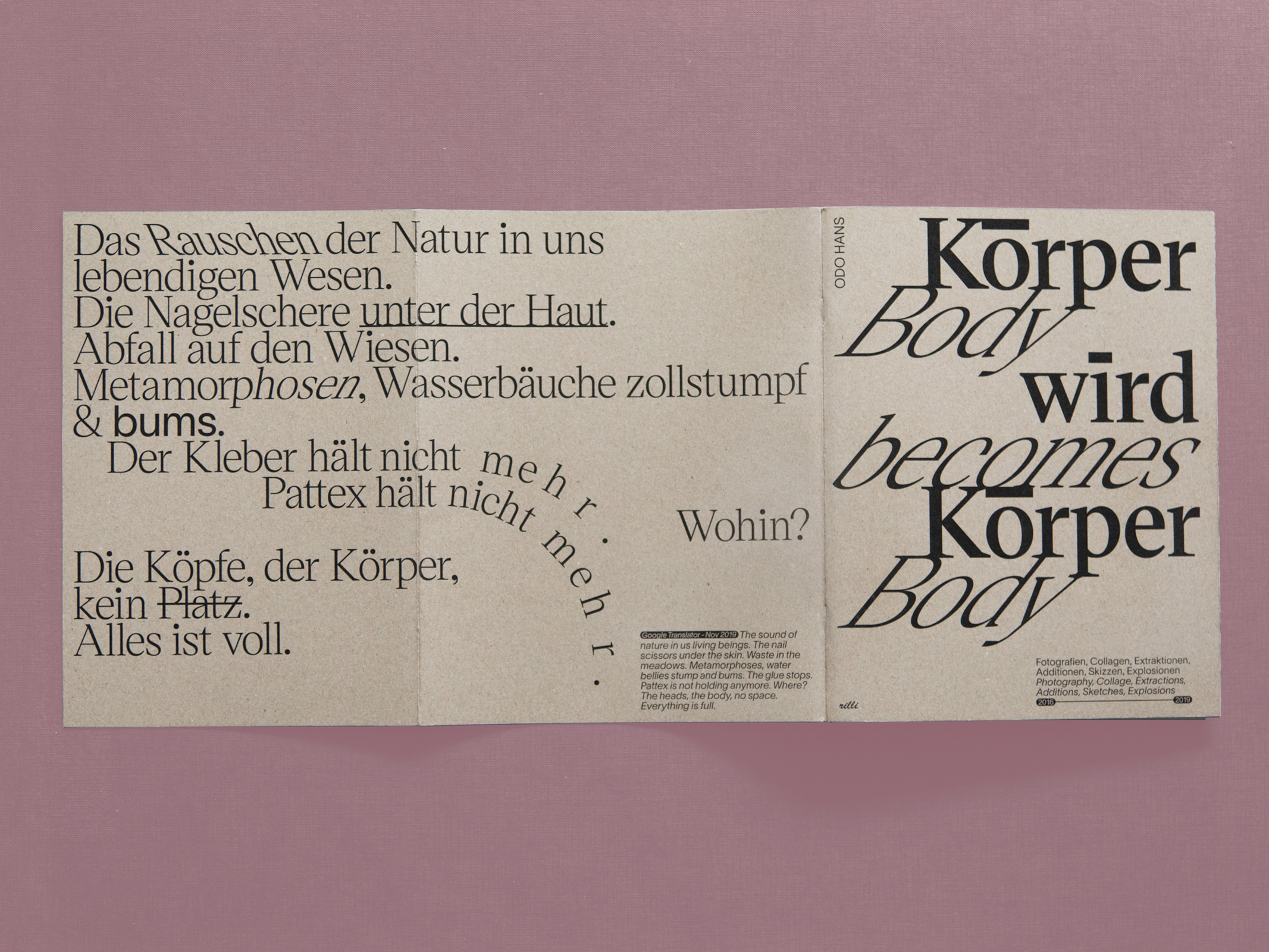 Filter
No-name coffee filters are analogously folded and than transformed into a two-dimensional object of data-handling. Once scanned and converted into this shape, the now available data itself becomes an object of filter processes. In the context of the data-handling, these algorithm-driven processes reveal, in their border areas, forms of inherent logic. Within these, the original data is transformed into mysterious symbolistic shapes, which appear to contradict the determinism of this solution. The complex essence of these invisible algorithms and digital filters consequently becomes visible, on the object of the analogue filter, as the most improbable and yet most self-efficacious solution, in the form of colour leaps, colour seams and other artefacts as an ensemble of fantastical phenomena.